After our (seemingly ongoing) winter of wet and cold, Britain’s roads are pockmarked with potholes. According to a report by the Asphalt Industry Alliance, over 40,000 miles of UK roads could become unusable in five years due to the £556million shortfall in local council funding. Over 2.7 million potholes were filled by councils in 2015, but only 1.5 million in 2017.

Damage to roads is a worldwide problem, but not all is caused by natural forces. Overloaded trucks can cause extensive damage to road surfaces and bridges, so much so that the authorities in the Indian city of Hyderabad have invested in Weigh-in-Motion (WIM) systems on access points to the city’s Outer Ring Road (ORR).

Increasing axle load is a serious problem for the ORR, causing cracks, potholes and ruts that increase the rate of road erosion. Hence the authority in charge of the road, the Hyderabad Metropolitan Development Authority, have decided to install 9 separate WIM pads at major toll plaza entry points. The WIM system can weigh vehicles at speed of up to 15km per hour, and the data gathered is used to penalise the owners of overloaded vehicles.

The WIM pit-based system uses four load cells on a deck structure, embedded into the road. The heavy duty load cells installed are capable of weighing up to 40 tonnes per axle, and are hermetically sealed to protect them for dust, dirt and water.

According to HGCL Chief General Manager, B Anand Mohan,

“The effect of wear on the road on one 38 ton six axle lorry with legal axle weight is the same as 35,000 cars. Axles overloaded by 20 percent can do up to eight times the damage of a correctly loaded axle. Overloaded vehicles are more difficult to control because of limited vehicle manoeuvrability and stability.”

In the UK, most public weighbridges are operated by private operators, who are licenced by their local Chief Trading Standards Officer. According to Hampshire County Council (HCC):

“Operators of public weighing equipment have responsibilities to ensure that they can perform their duties competently and honestly.” 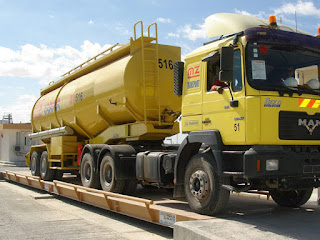 The advice to operator with regards to their load cells is fairly straightforward - keep them clean and dry!

“Beneath the plate, levers or load cells may be affected by the build-up of dirt (sand) and this should be cleared as necessary. If your weighbridge is prone to such contamination, a regular maintenance programme should be implemented. In a pit-mounted weighbridge, balance and accuracy may be affected by a high water level in the pit which ‘floats’ the bottomwork. In such circumstances pumping facilities should be available.”

One tip we would add is the need to check the calibration of load cells on a regular basis. Calibration ensures that load cells give an accurate reading every time, and helps detect any deterioration in their performance over time. (For more details see our Calibration page.)

Fraud is a major concern for weighbridge operators, and according to the HCC website, it’s not just overloaded HGVs that are an issue. They definitely need to keep their eyes open!

“Note on the weighing certificate if any parts of a vehicle are missing. It is not unusual when weighing for taxation purposes for seats, spare tyres and even batteries to be removed in order to get the weight down to a lower category.”

Interestingly, in terms of the Road Traffic Act on vehicle overloading, the operator can drawn the driver’s attention to this and mark the weighbridge ticket with ‘vehicle possibly overloaded’ but cannot withhold that ticket or prevent the vehicle leaving.

Correct loading is also important for both the driver and other road users. According to the Vehicle and Operator Services Agency (VOSA), overloading a vehicle:

“Makes the vehicle less stable, difficult to steer and take longer to stop. Vehicles react differently when the maximum weights which they are designed to carry are exceeded. The consequences can be fatal.”

Overloading also puts more strain on a vehicle’s tyres, causing them to wear more rapidly and increase the risk of blow-outs.

Once again, it’s the humble load cell at the heart (or the base) of the weighbridge system that helps keep lorries, trucks and HGVs on the road within DoT safe axle weight and Gross Vehicle Weight limits.

So, next time you rumble over a pothole, just imagine how much worse the situation would be without the hard-working load cells weighing the UK’s trucks!

Let us take the load

If you require robust, reliable and weather resistant load cells, call us. We stock an extensive range of load cells at our manufacturing base in Reading, and can ship them anywhere in the Uk quickly and easily.

Popular posts from this blog